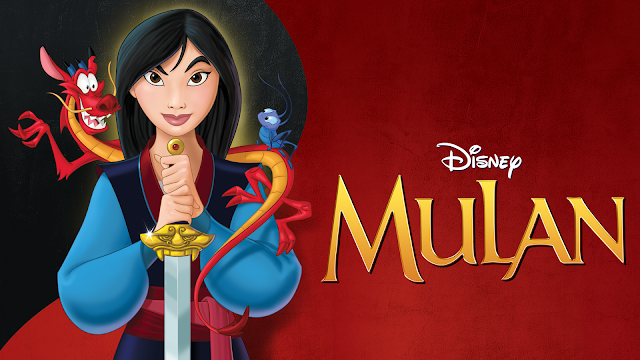 I hope everyone is hanging in there, keeping busy and safe at home! Here is another bedtime story, as requested, and it's one of my favorites.


A long time ago, a girl named Mulan lived in a village in China with her mother and father. She tried her best to be a good daughter and bring her family honor, but she was a girl who spoke her mind and stood up for herself, in a time when her culture valued silence.

When China's enemies, the Huns, invaded the country, the Emperor's secretary came to her village to call one man from each family to join the army to protect China. Mulan's father had already served China's army and had a limp in his leg that made it painful for him to walk. Mulan rushed forward to beg the secretary to excuse her father from more service.

The secretary was offended that Mulan spoke to him and Mulan's father was embarrassed by her outburst.

But that night, Mulan decided she couldn't let her father go to war. To save him, she would pretend to be his son and go join the Army in his place. She cut her hair short and stole her father's armor. She took her family's horse, Khan, and rode off to join the Army camp.

The spirits of the family's ancestors lived in the pagoda behind their house. When they saw what Mulan had done, they called a meeting to discuss what to do. They sent Mushu, the tiny dragon messenger, to wake the Great Stone Dragon to go and stop Mulan from causing her family dishonor with her deception.

But instead of waking the Dragon, Mushu accidentally broke the statue! He hid the broken dragon from the other Ancestors and went off to take care of Mulan on his own. Mushu decided that instead of stopping Mulan and bringing her home, he would help her become a hero. That way, Mushu would be a hero as well and the other Ancestors would stop making fun of him.

When Mushu caught up with Mulan she was startled by the tiny dragon and smashed him with her shoe. But he convinced her to let him help.

Mulan's time in the Army didn't go well at first. She didn't make any friends and in fact, many of the men disliked her because she was a little bit clumsy.

Captain Shang made the company work hard. Mulan, who told everyone she was a boy named Ping, was so bad at all the drills, Captain Shang told her to leave and go home. But Mulan didn't give up. She worked even harder and eventually, she and the rest of the company made the Captain proud. And in the process, Mulan made friends with her fellow soldiers Yao, Ling and Chien-Po.

As the company traveled through the mountains to meet up with the main Army, they were attacked by the Huns. They were going to be overrun!

Mulan had an idea. Instead of shooting the last rocket at the Huns, she took it and ran toward them. Then she turned and shot the rocket up toward the mountains.

"You missed," the Hun general, Shan Yu, said with a smirk. But Mulan's rocket caused an avalanche that wiped away all of the Hun army. It nearly wiped away her own company too, but Mulan and Khan leaped off the edge of a cliff in order to rescue Captain Shang, who would have been knocked off the side of the mountain.

Mulan was wounded in the battle and the doctor discovered that she was actually a girl. The punishment for lying to an officer was death, but Captain Shang spared her life, because she had saved his.

"A life for a life. My debt is repaid," he said. Then the company left her, on their way to the Imperial City, to be honored by the Emperor for defeating the Huns.

But as Mulan made a small fire on the snowy mountain and resolved to go back home, she saw that the Huns were not defeated. They were coming back out of the snow and heading to attack the Imperial City!

Mulan, Khan and Mushu raced to the Imperial City to warn everyone. But Mulan was dressed as a woman again and no one would listen to her. Not even Captain Shang and her soldier friends.

Then, the Huns attacked. They surprised the Imperial Guards and took the Emperor prisoner inside his own palace. Mulan had an idea. She asked Yao, Ling and Chien-Po to help her rescue the Emperor and they agreed. Even Captain Shang came to help. Mulan dressed her friends up as women and used the skills they had learned together in the Army to climb the palace walls.

In their disguises, they tricked the Hun guards into letting them in, then knocked them out and tied them up. Mulan and her friends found the Emperor and helped him escape by sliding down a rope off the balcony.

To keep the Shan Yu from going after the Emperor, Mulan cut the rope, trapping herself on the balcony. Mulan scrambled up to the roof and Shan Yu followed. Mulan cleverly used her fan to take the sword from Shan Yu, then she pinned his coat to the roof.

Then Mushu, strapped to a firework, used his dragonfire to light the fuse and shot the rocket toward Shan Yu. The explosion flung Mushu down onto Mulan and Shan Yu off into the rest of the fireworks, which exploded and lit up the night sky.

The Emperor was grateful to Mulan for rescuing him and banishing the Huns from China. In front of the whole crowd of people, the Emperor bowed to Mulan, than all the rest of the people did too.

Mulan declined the Emperor's offer to stay and become his Advisor. She wanted to go home. So the Emperor gave her gifts.

When Mulan got home, she gave the gifts to her father, to honor him and her family. But her father pushed the gifts aside and hugged Mulan.

"The greatest gift of all," he said, "is having you for a daughter."

Just then they heard Captain Shang. He'd come to return Mulan's helmet, which actually belonged to her father, and Mulan invited him to stay.

Mulan had earned the respect of the Emperor and the whole country, but that didn't matter to her as much as keeping her family safe. And in the end, they all lived happily ever after.