How to Render Beef Tallow (and make French Fries)

Welcome to my blog, where you get Princess bedtime stories and learn how to render suet into tallow like a homesteader. There's something for everyone!

Tallow (which is essentially lard except from a cow instead of a pig) is great for high-heat cooking (read: deep frying).

Tallow is an excellent source of niacin, vitamins B6, B12, K2, selenium, iron, phosphorus, potassium and riboflavin. Grassfed beef tallow contains high ratio of conjugated linoleic acid (CLA) which is a cancer-resistant agent. Contrary to the popular conception, tallow is good for health as tallow fat is similar to the fat/muscles in the heart. Recent studies have shown that human beings need at least 50% of saturated fats like tallow and lard to keep the heart pumping hard and healthy. Tallow from pasture-raised cows also contains a small amount of Vitamin D, similar to lard.
Source: Beeftallow.com

Beef suet (fat) is cheap and can probably be found at the grocery store or butcher. We bought a bunch to grind into our venison and wound up using a fraction of it, so we decided to render it into tallow for cooking. We had saved some fat trimmings from steaks and added that in as well. Fat from grass-fed cows is preferable. 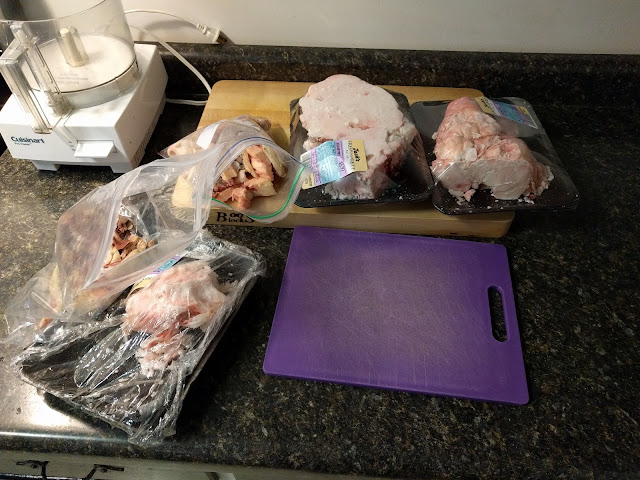 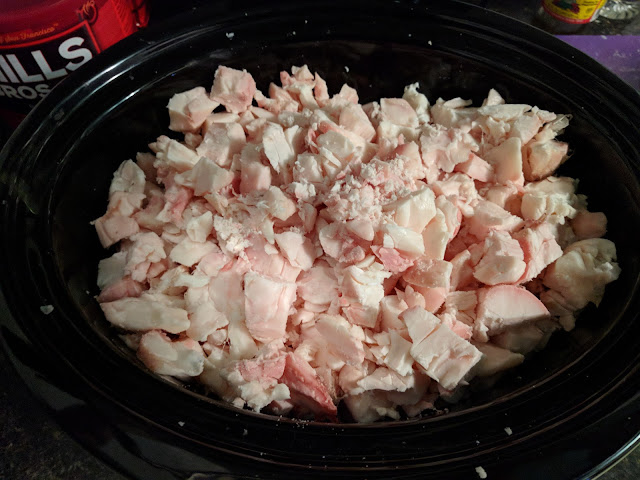 Some blogs say to run it through the food processor to grind it nice and fine but that sounded like it'd be nasty to clean up so I just chopped it into roughly 1/4" cubes. (The finer the chop the faster the render.) Cut off any meat or blood that's hanging around. I didn't fuss with it too much.

You can throw some water in to prevent burning, but it's not necessary. Just keep your crock pot on low.

Throw it in the slow cooker for 8-10 hours and that's basically it. If your chunks are bigger, you'll be more on the 10-hour side. Give it a stir two or three times throughout. You'll know it's done when the fat chunks have shriveled up into brown, almost-crispy bits. These, my friends, are called cracklings (because of the crackling sound they make when hot. It's a delightful, almost cheery sound, like a hundred tiny bits of fat are giving you a round of applause.) 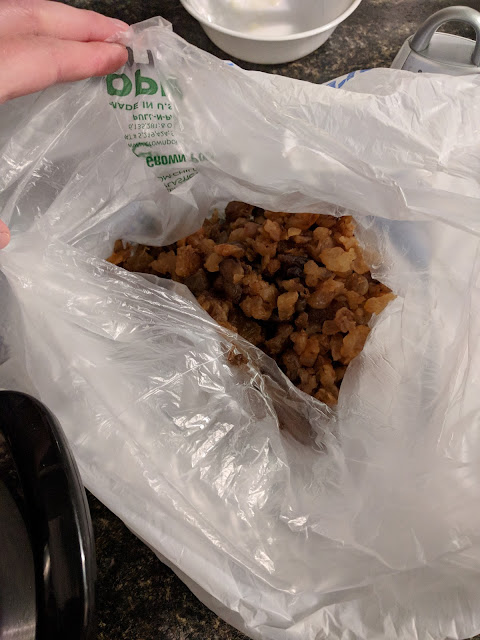 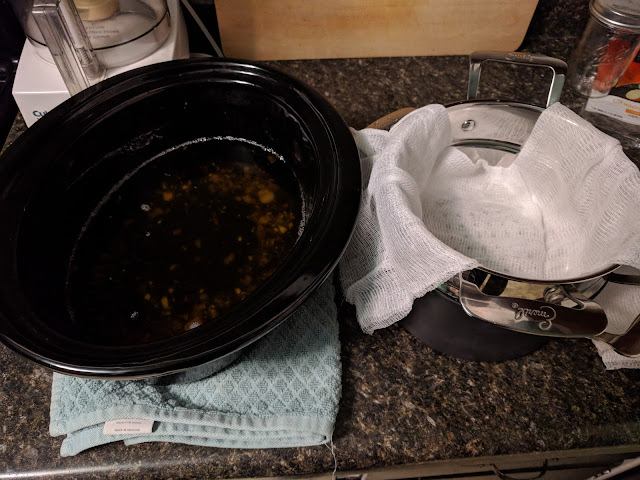 Scoop out the big chunks first, then strain through a cheesecloth and store at room temp, in the fridge (will keep longer) or in the freezer (will keep even longer).

My 6 quart crockpot was full of 5 lbs of suet and rendered two 16 oz jars and one 32 oz jar of tallow.

How to Make French Fries


Melt tallow into a high-walled pot at medium-high to high heat. The smaller the base, the less tallow you'll need to use. Ensure there's at least 2" of pot above the tallow to cut down on splatter.

Peel and cut potatoes into matchsticks (the larger the sticks the longer the cook). Optional: soak in cold water for an hour. Why? I'm still not exactly sure but a lot of blogs said to do it. If you do this, be sure to pat them dry before adding them to the tallow. I skipped that step because I'm lazy and everything turned out just fine. 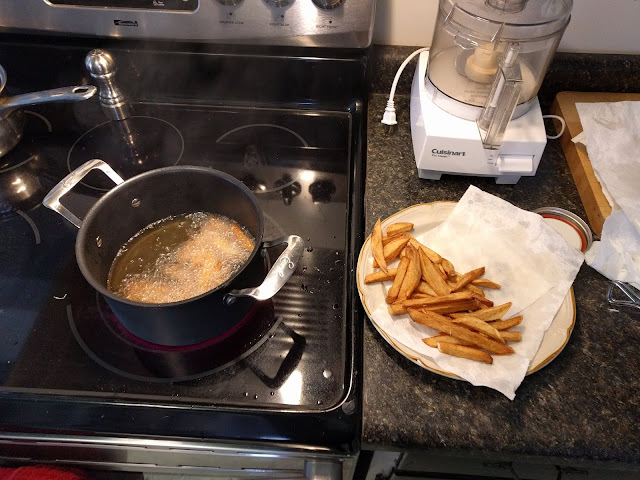 If you have a thermometer, check that your oil is up to 375-ish. When you carefully lay the fries in, it'll bring the temp down to a perfect 350. If you don't have a thermometer, dip in a wooden spoon. If it bubbles, you're hot enough. On my stove, the perfect burner heat is 6.

Lay small batches of fries in the pot, making sure they're all submerged. Fry for 3-5 minutes or until a nice golden brown. It depends on the thickness of your cuts and how many fries are in the batch.

My first batches got soggy once they cooled down, so I threw them back in for another 2-3 minutes and they turned out perfectly crispy and brown even after cooling. Double-frying is the key!

Sweet potato fries take less time to cook, about 3 minutes for the first fry and 2 for the second.

Sprinkle with salt and enjoy immediately; just let them cool enough so you don't burn your tongue!

Here are some more posts about tallow's benefits and other uses:
Oh Lardy
Happy Money Saver
The Prairie Homestead 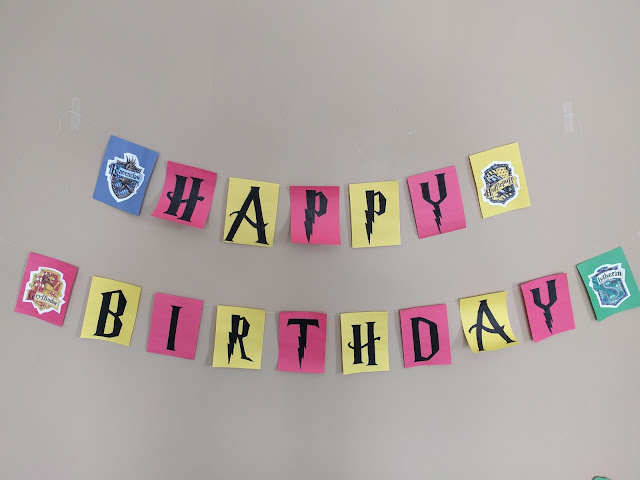 Babs just turned 4 years old. And she's suuuuuuper into Harry Potter. I can't tell you how many times a day she instructs me to pretend that I'm Ron Weasley taking a polyjuice potion then turning into Crabbe or Goyle or a cat then battling a basilisk.

I won't complain (too much), it could be way worse. 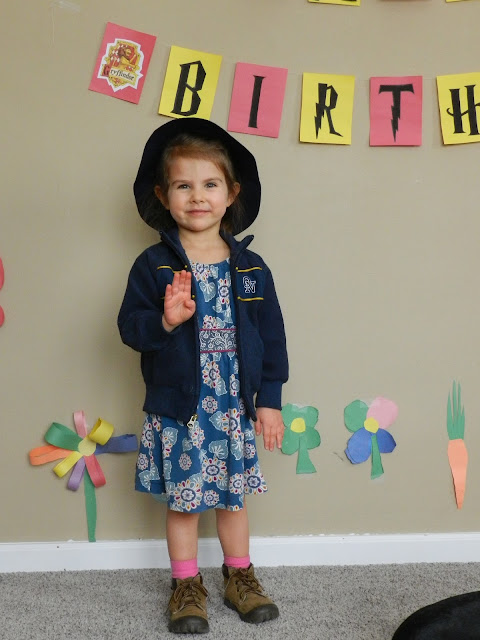 So anyway, I made her a Happy Birthday banner using Harry Potter font. There are a number of font generators that you can plug in whatever words you want and print them out, but to make the banner super special like I did, I saved each letter individually, printed them and cut them out to paste onto colored paper. Red and gold because Babs is a Gryffindor, obviously. 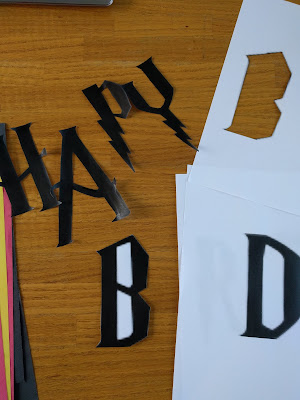 Cut construction paper into quarters and glue the letters on. Print some Hogwarts House crests too. Tape onto a string and voila! Instant happy child.