I get it. I know how to read my Blogger Stats. I'll blog about Spanish adventures for my mom to read, but for everyone else, here's another Bedtime Story to entertain the wee ones. 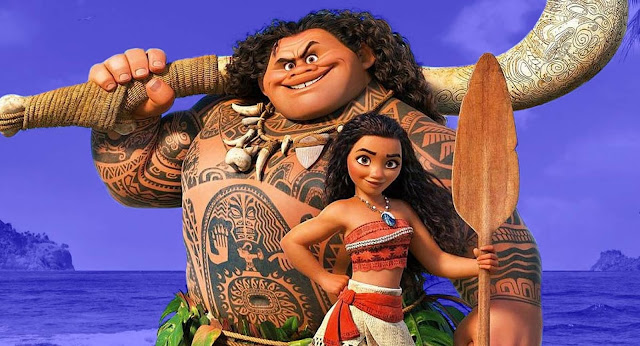 In the beginning, there was nothing but darkness. Then Te'Fiti, the mother island, brought life into the world using the magic of her heart. But after time, many sought to steal Te'Fiti's heart for themselves. The demi-God Maui finally succeeded, but was quickly struck from the sky by Te'ka, the lava monster. The heart of Te'Fiti was lost and a curse spread slowly across the ocean from island to island.

Many years later, a girl named Moana grew up on the island of Motunui. One day when she was very young, the ocean gave her a gift: a glowing green stone. Little Moana lost the stone, but her Gramma Tala kept it safe for her as Moana grew.

Moana's father, Chief Tui, taught Moana what would be expected of her as the village's new Chief: to respect their ancient traditions and most of all, do not go beyond the reef out into the open ocean. But the ocean seemed to call to Moana and she always wondered what was beyond the horizon.

One day, the curse of Te'Fiti finally reached Motunui, poisoning the coconut trees and driving the fish away. Moana felt sure the answer to their problem was beyond the reef, but her father still wouldn't let anyone leave the safety of the bay. Then, Gramma Tala showed Moana the cave where her ancestors had put away their boats. Their people had been voyagers! They'd stopped sailing long ago, to protect their people from the monsters that roamed the ocean in search of the lost heart of Te'Fiti.

Gramma Tala returned the heart of Te'Fiti to Moana and reminded her that the ocean chose her to find Maui and restore the heart to its rightful place.

So, even though Gramma Tala was very sick, she encouraged Moana to take a boat from the cave and go in search of Maui.

Gramma Tala said, "Go. Find Maui. When you do, you grab him by the ear and say, 'I am Moana of Motunui, you will board my boat, sail across the sea and restore the heart of Te'Fiti.'"

Moana had no idea how to sail and, thanks to her surprise stowaway, the chicken HeiHei, she had some setbacks, including a violent storm that tipped her boat over. But the ocean helped guide her to the island where Maui had been stranded for the last 1000 years.

But Maui didn't want to help Moana. All he wanted to do was get his magic fishhook back from Tamatoa and go back to being awesome. He tricked Moana and locked her in a cave, then stole her boat! But Moana was clever. She escaped the cave and with the ocean's help, got back on her boat with Maui.

Just then, they were attacked by the Kakamora, vicious little pirates in coconut armor. They were after the heart of Te'Fiti! HeiHei swallowed the heart and the Kakamora grabbed the chicken. Maui pulled some tricky maneuvers with the boat to help them escape without the heart, but Moana went back for it. She batted the coconuts out of the way, grabbed the chicken, swung back onto her boat, then Maui sailed them to safety.

Maui and Moana struck a deal: she'd help him get his fishhook, then they'd restore the heart so he could be a hero again.

Tamatoa's lair was in Lalotai, the realm of monsters. Maui jumped down the tunnel, not expecting Moana to follow, but she did. They found Tamatoa, a giant crab covered in golden treasure, with Maui's fishhook on his back. Moana distracted the crab while Maui grabbed his hook. But after 1000 years without it, he'd forgotten how to use it, and Tamatoa almost defeated him. But Moana thought quickly and created a diversion using a barnacle covered in bio-luminescent algae to help them escape.

Back up on land, Maui thanked Moana for her help, but he was sure they'd never be able to defeat Te'Ka if he couldn't use his hook. Moana encouraged him to keep trying and eventually he got the hang of it again and was able to transform himself into anything he wanted.

When they reached Te'Fiti, Te'Ka emerged to block their path. Maui warned Moana to turn back, but Moana thought she could sail past the lava monster. But she wasn't fast enough. Maui used his hook to protect her from the monster's blow, which cracked it. One more hit and it would be gone forever. Maui was upset Moana hadn't listened to him and left.

Moana begged the ocean to choose someone else for this task. She thought she couldn't do it. But then she was visited by the spirit of her Gramma Tala, and Moana realized she had the courage to try again. She fixed up her boat and sailed back to Te'Fiti to face Te'Ka by herself.

Using the sailing tricks she'd learned from Maui, Moana was able to trick Te'Ka and sail past the barrier islands. But a flying lava ball knocked her boat over. Just as Te'Ka was about to smash Moana with a fiery fist, Maui flew in as a giant hawk and saved her!

"Maui, you came back!" Moana exclaimed. "But, your hook," she said uncertainly.

Along their journey together, Moana had taught Maui that what makes him special isn't what he has, but rather what's in his heart. So Maui shrugged, "Hook or no hook, I'm still Maui. I got your back, Chosen One. Go save the world."

He told her to return the heart to the spiral. As Maui battled Te'Ka to distract the monster from Moana, his hook shattered. Moana climbed the mountain, but once at the top, she found Te'Fiti was gone! But she noticed a spiral on the chest of Te'Ka and realized Te'Ka was Te'Fiti!

Moana said to the ocean, "Let her come to me." The ocean parted to allow the fiery lava monster to cross the distance to Moana. Moana sang a song about all that she'd learned about herself since she set out on her journey and reminded Te'Ka of who she really was.

"This is not who you are. You know who you are. Who you truly are." Te'Ka stopped fighting and allowed Moana to place the glowing green stone in the center of the spiral on her chest. The hard lava stone cracked and fell away, revealing the lush, green Goddess of Life underneath: Te'Fiti.

Te'Fiti scooped Moana and Maui up in her hand. Maui very humbly apologized for stealing her heart and Te'Fiti gifted him with a new hook. She gave Moana a boat to sail home on, then took her place as the mother mountain again.

Moana invited Maui to come back to Motunui with her.

"My people are going to need a master wayfinder," she said. Maui smiled at her and said, "They already have one." He showed her the new tattoo that appeared on his chest: of Moana and her boat! Moana gave him a big hug goodbye and he transformed into a giant hawk and flew away.

Moana sailed home to find her island bountiful again; the curse had been broken. Her parents were so happy to have her back again, and Moana taught her people all that she'd learned about wayfinding. They started voyaging across the sea again, to explore and find new islands. Moana got to sail the sea as she'd always dreamed, and she and her family were happy.