I've traveled more places now that I'm a mom than I ever did in my carefree early 20s. 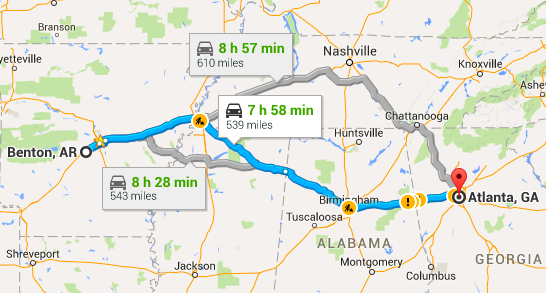 Now that the only schedule I have to adhere to is feeding and putting a toddler to sleep (both of which can be done in a car) we're so mobile it's ridiculous.

So we decided to go visit some friends in GA. They have a 9 month old little boy; we figured Babs would like to see him again.  (We were right.)

Mr. Go wanted to share this nugget of wisdom about our trip: "Don't underestimate 539 miles." Not that many people would, but... 8 hours? After our last two road trips were 17+ hours.... we thought it would be just like popping over to see a neighbor. (We were wrong.)

We drove at night, starting at 6 p.m. and getting in around 3 a.m. Babs woke up when transferring her into the house to her pack 'n play, and wanted nothing but to explore the house. She was furious that I wouldn't let her. By some miracle she didn't wake up their baby (glory glory hallelujah). I watched a movie with her on my phone in bed, hoping she'd fall asleep (since it had worked before) but had no luck. Mr. Go thought this was a truly terrible idea and at 5 a.m., both of us exhausted and with a screaming baby, made for a not-so-pretty sight.

She finally fell asleep in our friend's baby's swing, and Mr. Go took her (swing and all) back upstairs to her room when the sun came up so the rest of the house waking up wouldn't disturb her.

After being able to explore the house and satisfy her curiosity about being in a new place, she napped pretty easily the rest of the weekend, only crying for 1-2 minutes before putting herself to sleep for the first nap, then going down like an angel after that. Our friends offered to let us use their pack 'n play, but we opted to take our own, so Babs would have as many familiar things/smells as possible.

For next time: If she wakes up on the transfer inside, take her on a quiet tour before trying to put her to bed. It might not work, because this baby is a constant mystery to me, but it's worth a shot.


We took her on a hike up Kennesaw mountain, to play at a big park and went out to eat at a fabulous Louisiana-style place called Henry's. The rest of the time we stayed in, hung out and let the babies play together. But the best thing to do in Kennesaw is to play bean bag toss in the unfinished basement of a friend's enormous house.


I am so glad Babs is as independent as she is now. And she'll only keep getting more fun the older she gets. I forgot how utterly helpless (in a good way) infants are. It's a legit miracle that every day she's growing and she'll never be the same as she is at this very moment. I guess the same is true of all of us, and it's good to be reminded every now and then to be thankful for the moment you're in--because it's the only one you've got.
Posted by The Go Family at 9:49 PM No comments:

I should've titled this post How to Live For Free While Traveling the World, but that's a little misleading. While that is the end result, the process was a little more complex than that.

While living in Arkansas, we decided to rent out our CO home so that it would generate us some income instead of sitting there unused. There were several options for this, but we chose Airbnb because the website is easier for customers to use. Preparing the house for "vacation rental" seemed like it would be easy.

Many people rent out a room in their home while they're still living there and have a lot of success. A woman down the street from us did that, but the room was accessible from its own door so it was pretty private.

To ensure the possessions we cared about were protected, we moved all of our personal items (clothes & other important things) to either the shed in the backyard or the crawlspace, which we locked. It doesn't sound like a lot of prep work but it definitely was. We went through the entire home item by item. If we would be upset if it was ruined, it went into storage for protection.


Packing up my closet was a huge task in itself. I weeded out a ton of stuff, but that still left 6 totes (!!!), not including my shoes. Then there was the guest room closet, in which I stored my overflow things, like Halloween costumes and maternity clothes. This brought me to the grim realization that I own too much stuff.

Colorado is a vacation destination, which we remembered when we received a huge surge of interest in renting our home. But I chose to rent to one family who was interested in a longer-term stay.

The Result (so far)


We've had two families stay in our home using Airbnb so far. After so much prep work, we were nervous about it being a disaster, but it's gone great. Our first guests stayed for 9 days and were respectful and even washed some of the sheets to make it easier on our cleaning person.

The next guests are renting longer term. We have good communication with them and they seem like good people. They're booked for 3 months with the expectation to stay through the end of the year.

We're hopeful it'll be a good source of income while we're not living in the house. If all goes according to plan, it should pay for the mortgage and utilities there, and the mortgage on the house we're living in now.

It's tough to do while we're out of state, but we have a friend mowing the grass and checking in, which puts my mind at ease to know we have someone we trust keeping an eye on things.

Update: The family living in the house (The Stays) are amazing. They're thoughtful and helpful and super chill. Even though we could be making a lot more money with more, shorter stays, and there's a lot more wear and tear on our house this way, I'm glad to have someone we know we can trust in the house. We know they'll take care of things, whereas a bunch of random strangers might be fine, but they also might not be.
Posted by The Go Family at 5:13 PM No comments:

The No Hassle Approach to Investing

My time is my most valuable form of currency. I choose to spend it doing whatever the hell I want with the people I want to share it with. One thing I don’t want to waste my time on is stressing over near term market movements, entry/exit points and charts! There are people who do this all day, every day and they are rewarded handsomely for it.

Now, I’m not at all qualified to give you investing advice. But I can tell you what I do with my money. I can also promise you that I’ve spent hundreds of hours researching this topic (and stressing over near term market movements, entry/exit points and charts) to develop a no hassle approach to investing that will provide maximal output. Let’s dive in.

Here’s what you should know before I unveil my Automated Money Machine:
The Automated Money Machine
I’m enrolled in a non-retirement account at Vanguard.com. I’m invested in four mutual funds (To the tune of 0.20% in annual fees, this is why the Vanguard is important):
Deposits are scheduled monthly from my bank account and money is automatically invested according to this asset allocation. Go rebalance your account once a year and you’re done. It’s that simple.


But what about retirement?
The same principles apply. I max out my retirement contributions prior to adding funds to the non-retirement account. I don’t qualify for a Roth IRA (otherwise I would), so my money has to be invested in an SEP-IRA. I’ve chosen to manage this with Fidelity. The Fidelity mutual funds I invest in are: Spartan 500 Index (FUSVX), Spartan Long Term Treasury (FLBAX), Spartan Intermediate Term Treasury (FIBIX), Fidelity Select Gold (FSAGX), and Fidelity Global Commodity (FFGCX). The only difference from the prior allocation is that Gold and Commodity are each weighted 7.5%.

But what do I know? The truth is, nothing. No one knows where markets will go next. But I do know I won't be wasting any of my most valuable currency worrying about it. I continue to work hard for my money and I'm determined to protect it and grow it in the easiest way possible.