Traveling in a Van with a Child + 2 Dogs 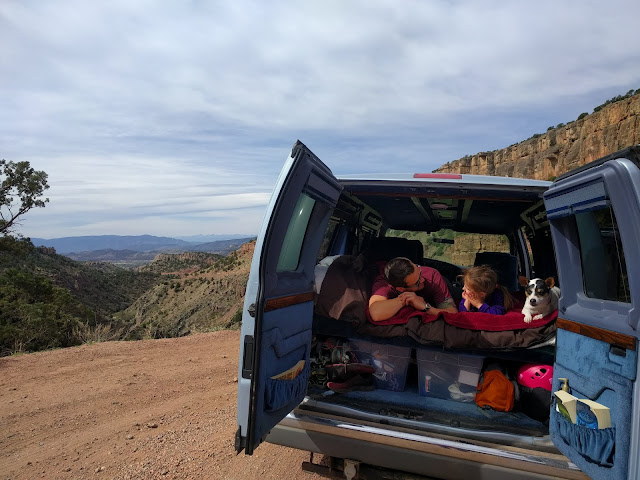 Mr. Go finally did it. He bought a conversion van to fulfill his dream of living in a van down by the river. But, like, not in a creepy way.

We took 'Speed', as Babs dubbed the big blue boat, for a test trip in January, to try getting OUT of the cold. But alas, it was the coldest week on record in the South, the cold front dipping daytime temperatures to the mid 30s in FLORIDA. But at least the snow didn't tower outside our doors. 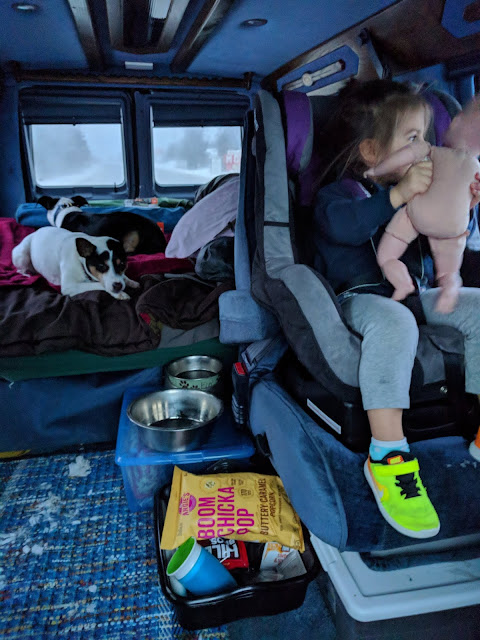 As many free campsites and even paid campgrounds were closed in the Midwest in the midst of winter, we spent a few nights in Walmart parking lots until we could get on a main highway and find some rest areas. A couple nights were spent at a friend's in Georgia, so Babs could play with their two kids. We brought the tent, thinking we'd camp further south, but we slept in the van the whole time.

We laid a 1/2" old eggshell foam piece over the electric lay-down bed, which proved wicked uncomfortable. Leading me to...

UPDATE 1: Foam mattress.
Sleep might be the most important component of having a good trip, so this was well worth it. Since we seldom use it as a seat on long-term trips anyway, we mostly leave the bed down. And if we need to, this short queen mattress topper lifts easily and we just haul it out.

The bed provided good storage underneath, but there were some things that needed to go in the "living room." Such as the potty. It was mostly for Babs but it came in real handy on cold nights in Walmart parking lots when you just don't want to have to walk across the lot to use the potty. Yeah I peed in a bucket, if you lived in a van you'd understand. 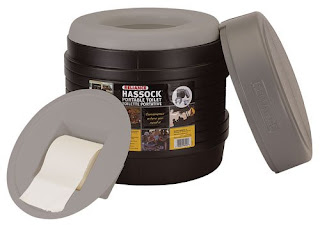 Keeping your living room tidy is also vitally important on long trips. You need room to move around. Thus:

UPDATE 2: Storage in Totes.
Since we didn't go all out and build in cabinets or anything, we needed somewhere to put our stuff. We brought our climbing gear, camp cooking equipment, cold weather AND warm weather clothing and other comfort accoutrements.

One tote in the back housed things we didn't need to get at very often, such as first aid kit, climbing gear, tools, etc. The other we stored cooking equipment and the like, which we were always getting at, and came inside with us when we stayed nights in friends houses.

As coffee-lovers, we had a small tote dedicated to coffee equipment, so first thing in the morning all we had to do was pull out this little tote instead of rifling around in the bigger one through pans and baby monitors to get our caffeine.

We also had a separate tote for "important things" which mostly housed our toiletry bags, passports and kindles. The idea being: the van is on fire, we can only take one thing, grab the 'toiletry tote'.

For things I needed to access while the van was in motion, such as snacks, we got a dishwashing bin from Dollar General. But I just do my dishes in the pan I cooked in anyway, so its use has morphed. It seems to accrue other things as well, such as sunscreen, extra mayonnaise packets swiped from Subway and Mr. Go's headband, but it's a great easy-access catch-all. 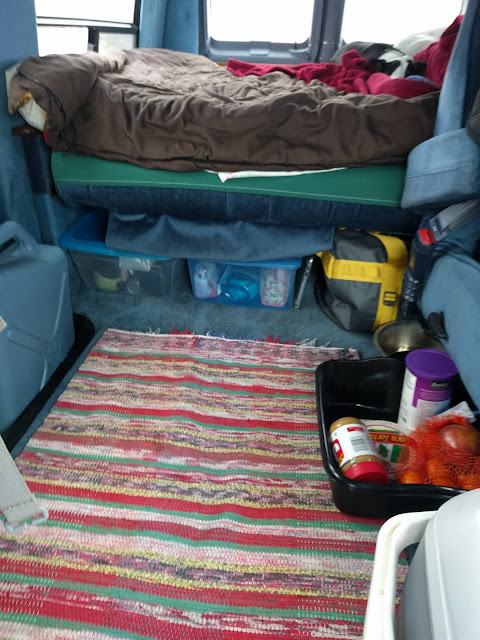 This is important, as most free campsites and even many pay sites (especially in off-season) do not have water pumps. Our 5 gallon, hard-shell water jug sits on the running board just inside the side door (at the far left of the above picture) so we can fill up our bottles at pit stops. And of course, I never pass up an opportunity to refill my Nalgene from a water fountain or at any restaurants we chance to stop at.

To charge our devices (phones, Kindles, cooler, etc) we were using an AC adapter plugged into the van cigarette lighter but the ports were limited and it slid around on the dash. The Goal Zero has two USB and two AC ports so we can stay charged on the fly.

We have a love/hate relationship with this Igloo cooler. It's great to not have to buy ice, but unless it's plugged in, it's pretty poor at keeping things cold. While the van is on, our snacks stay chilled, but at night it drains the Goal Zero pretty quickly, leaving us without charge for other devices unless we turn the van on again.

In April, we took Speed to Colorado to test our improvements, with great success. On the way out, we slept at rest areas, which are actually very comfortable. Most of them allow 24-hour parking, but select ones will have signs posted otherwise. Do some research if you can beforehand, check Google Maps for reviews, photos of the place or even the state transportation website might have some info on overnight parking.

You can't throw down your chairs and cook breakfast in the morning, but it's infinitely more comfortable to go in and brush your teeth or use the potty late at night instead of having to go inside a WalMart (more on sleeping at Wally World here).

On the homeward journey we stayed at real campsites, and even paid for them, just to see what that was like. Usually we use FreeCampsites.Net to scope out free places to stay. We've found some great spots, many with vault toilets, picnic tables and fire rings. Some are just a grassy spot on the side of the road in BLM lands (Bureau of Land Management.) FreshOffTheGrid has some good info on free camping here.

During the trip we camped free at Red Canyon Park near Shelf Road one night, where Speed ran over a rattlesnake--and it lived. The Park was beautiful, though the dirt road was wicked bumpy and would not be friendly for a trailer, and there seemed to be some homeless camping there too.

But paid campsites have their advantages. Such as: running water (sometimes). We took a shower at the Dakota Campground in Mitchell, South Dakota and it was actually very comfortable. Another perk: Being around other people. Sometimes I'm just creeped out by being alone in the middle of nowhere. Some campgrounds will also have play equipment, a huge perk for a cooped up 4-year-old and her weary parents.

Sometimes, paying for camping is not worth it. The village of Wilton, WI has a campground that is probably very nice if the weather was better, but it was rainy, soggy and cold when we stayed and $7 per adult and $4 per child was way too much for what we got. C'est la vie.

The Elk Mountain Campground in the Wind Cave National Park was very pretty. We hit off season pricing at $9/night and they provided firewood (for a donation) and had water spigots, though their indoor bathrooms were closed and there was 1 vault toilet for the campground to share (and it was quite busy too).

Many pay sites charge like this: Posted on the board with the rules and such, there will be a box of envelopes. You fill out the info, tear off the slip, put money in the envelope and put the envelope in the drop box. The slip you clip to a post at your chosen site or put on the dash of your vehicle. The village of Wilton had a person who just drove in and knocked on your door to take your cash. Dakota Campground just had a box for you to put cash in and no slip to prove you had already paid. 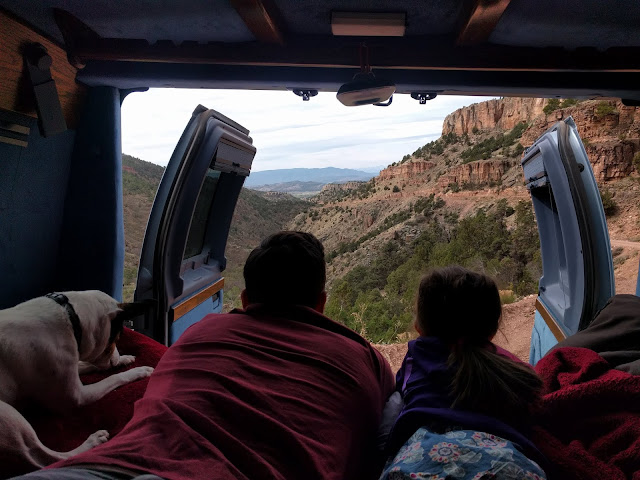 Carbon Monoxide Detector - You're sleeping in a small, enclosed space. You've cracked some windows, but just to be safe, get a battery CO2 detector so no one wakes up dead.
Hanging Light - Headlamps are the bare minimum but either a fancy battery lantern or some sort of light bungeed up somewhere improves the ambiance of your home on wheels.
Audiobooks for our 4-year-old were the savior of the trip. We had some long days driving and she got bored of coloring and scribbling pretty quickly. The City of Ember by Jeanne Duprau was a winner.

Van updates aside, during our trip, two of our friends were moving, so I packed up a couple of kitchens and Mr. Go hauled a lot of boxes in exchange for a place to stay and a dinner. Babs visited all her Colorado friends, acquired and used a climbing harness and helmet. 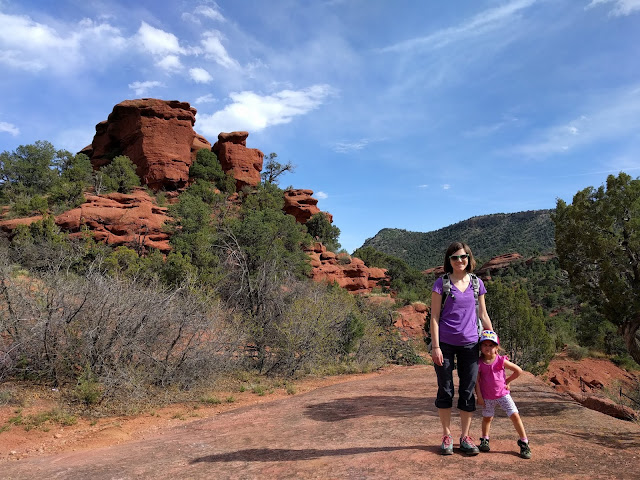 We traversed the front range, bopping in and out to visit with all of our friends. Another Update: I need to consolidate my necessary overnight items for easier in/out. Things tend to get spread out over the course of van living and I was forever making trips back out to the van for something I forgot to bring in. 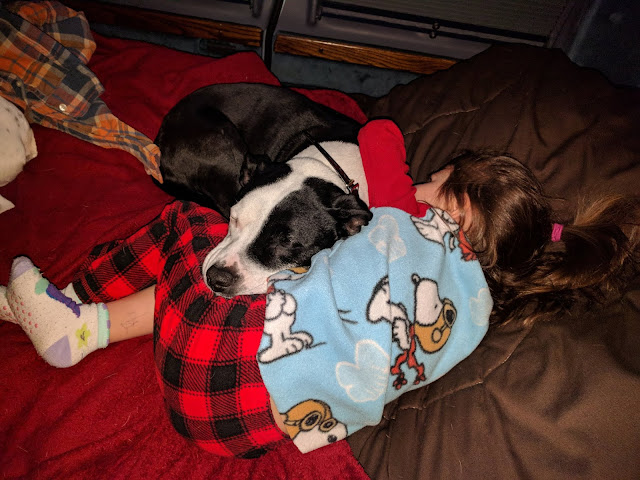 It was not a typical trip, in that we did a lot of in/out of the van for visiting friends. I'd have liked to have done more camping, more staying put in one spot for longer lengths. It would have cut down on the stress of constant motion but it was an excellent trip regardless.

Next time we take Speed out, we'll be camping at home in Michigan, then we've got several more road trips on the dockett. But we're enjoying the down time at home between trips, too. With gardening, garage sales and family all around us, it's always an adventure.