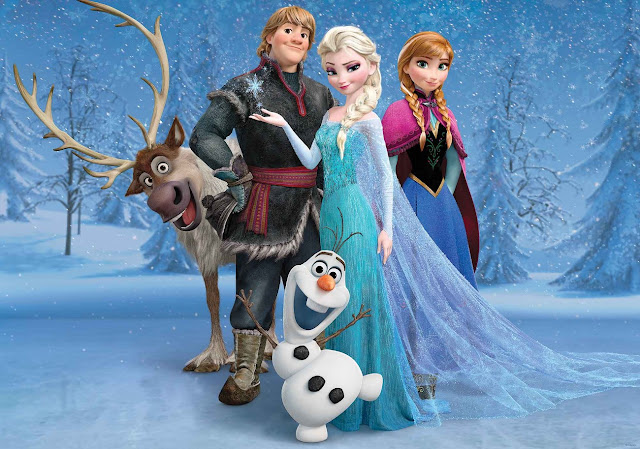 Does your child ask you to tell them the story of Frozen every night? Mine does. I got tired of making up the story every night, so I wrote it out to cut down on the brain power I had to use after a long day of child-rearing. If you can get some use out of it, here it is.

[Update: Here are links to my Beauty and the Beast Story, Moana Story, Cinderella, Little Mermaid, Mulan and Rapunzel too!]

Once upon a time, there were two princesses named Anna and Elsa. They were sisters, and the best of friends. Elsa was born with magic ice powers, and the sisters loved building snowmen and playing on the ice Elsa made. One day, while playing, Elsa slipped and accidentally struck Anna in the head with her ice magic. She started to get very cold and weak, so their parents took her to the trolls, who had their own magic.


The trolls removed the ice from Anna's head, but they had to take all memory of Elsa's magic with it. So Anna didn't remember what had happened, or that Elsa had magic at all. To protect Elsa's secret, the King and Queen closed the castle gates and limited the people who came inside. Elsa didn't want to hurt her sister again, so she stayed in her room instead of going out to play with Anna. This made Anna very sad and lonely.

Anna kept trying to get Elsa to come out to play, but Elsa's powers were growing stronger, and she didn't want to hurt her sister, so she stayed in her room. Even after the King and Queen were lost in a storm at sea, Elsa didn't come out.

Years passed, and it was time for Elsa to be crowned Queen of Arendelle. They opened the castle gates for only one day to let people in for the ceremony. After the ceremony there was a big party in the ballroom, where the sisters spoke for the first time in many years. Anna liked the open gates, and having her sister back. Anna also met Prince Hans of the Southern Isles, who was handsome and charming, and seemed to like Anna a lot. He asked her to marry him! And...Anna said yes!

Anna asked Elsa for her blessing for the marriage, but Elsa said no! She said, "You can't marry a man you just met!"

As the sisters argued, Elsa lost control of her emotions. When she became upset, her powers were harder to control, and she shot ice from her hands into the ballroom floor. Just like that, everyone knew her secret. Panicked and scared, she ran away into the mountains. Her fear caused an eternal winter to fall over Arendelle, when it should have been the middle of summer.

Anna went after her sister, to talk to her and get her to bring back summer. Along the way, she met Kristoff, the ice harvester, and his reindeer Sven. He agreed to bring her up the North mountain to find Elsa. They also met Olaf, an enchanted snowman that Elsa had brought to life. He helped them find the huge ice palace Elsa had built on the mountain.

Anna tried to get Elsa to come back to Arendelle with her, but Elsa liked being alone on the mountain, where she could let her powers be free and didn't have to be afraid of hurting anyone. Anna told her that Arendelle was stuck in winter and they needed her to bring back summer. Elsa got upset and scared, and lost control of her emotions again, accidentally striking Anna in the heart with her magic without realizing it.

Anna still didn't want to leave without Elsa, so Elsa created a big snowman to make them go, thinking Anna and Arendelle were better off without her. After escaping the snowman, Kristoff realized Anna was getting cold and weak, and her hair was turning white. He knew that meant Elsa had struck Anna with her magic, and he brought her to the trolls, who were his adopted family.

But Grandpoppy Troll said he couldn't help her. The ice was in her heart, and only an act of true love could thaw a frozen heart. They suggested True Love's Kiss. Anna thought she was in love with Hans, so Kristoff rushed her back to the castle.

Meanwhile Hans took some men up the North mountain to look for Anna and Elsa. They captured Elsa and brought her back to the castle, demanding that she bring back summer. But she told them, "Don't you see? I can't. I don't know how." Elsa escaped the castle using her magic, running out onto the frozen water of the bay.

When Kristoff dropped Anna off at the castle, Hans refused to kiss her. He said he didn't really love her, he was only pretending so he could have the power to rule Arendelle. He locked her in a room in the castle, where she became weaker and colder, and would soon turn to solid ice. But Olaf found her and let her out of the room. He looked out the window and saw Kristoff rushing back to the castle. Elsa's fear was making a huge storm cloud over the castle, and Kristoff wanted to help and protect Anna any way he could, because he loved her.

Anna realized she loved him too, and with Olaf's help, ran out onto the frozen water of the bay to meet Kristoff for True Love's Kiss that would save her from freezing to solid ice.

Prince Hans had followed Queen Elsa out onto the ice and told her that she'd struck Anna with her power. Elsa was devastated. All that she'd done to protect her sister had failed. Hans drew his sword and held it up above Elsa, intending to strike her.

Anna heard Prince Hans draw his sword and saw him raise it above her sister's head. She couldn't let him hurt Elsa! Instead of saving herself, Anna turned and put herself between Hans and Elsa to save her sister. As Hans brought his sword down, Anna turned to solid ice, and the blade shattered on the enchanted ice of her hand, knocking Hans backward.

Elsa looked up to see her sister, frozen. She cried and hugged her icy form. But, putting herself between Hans and Elsa to save her sister and sacrificing herself was an act of true love! So Anna began to thaw and came back to life. The sisters hugged, and Elsa realized that love was the key to thawing the winter. She thought about how much she loved her sister and removed all the ice and snow from Arendelle.

They sent Prince Hans back to the Southern Isles for his big brothers to deal with. Kristoff was made Arendelle's Official Ice Master and Deliverer, and Elsa kept the castle gates open. Everyone knew her secret now, and the people of the kingdom still loved her. The sisters were best friends again, and they all lived Happily Ever After.