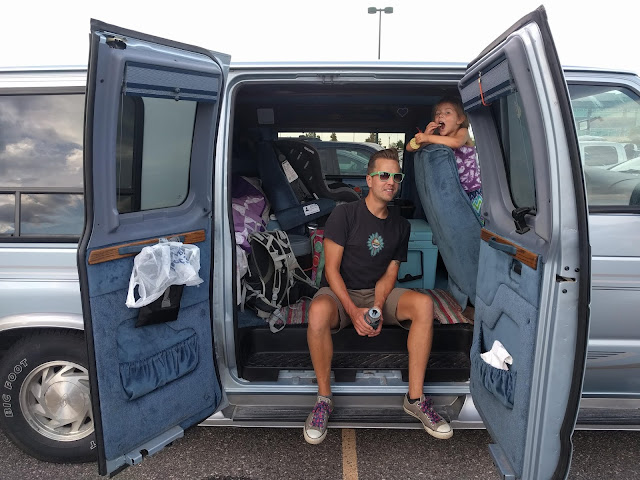 Our first stop on our recent Colorado road trip was to see Phish play at Dick's, an event we haven't missed in 7 years. This marked Babs' first Phish show, a momentous occasion to be celebrated with sequins, glow sticks, staying up too late and puking in the van (I'll let you guess who that culprit was). Hooray Go Family!

Many phans take their wee ones to shows, and though I am personally not a proponent of 2-week old infants in headphones, Babs was probably ready for it at 3 years. I do recommend noise cancelling headphones, such as these, to protect those developing eardrums.

I can't speak to other venues, though friends took their tots to a show in Raleigh, but Dick's Sporting Goods Park in Commerce City, Colorado is a very kid-friendly venue.

At the back of the floor at Dick's is the unofficial "Kid's Section," where parents set up blankets or strollers as a base camp and the children run rampant. There's enough space that they can move and not be lost, and parents (mostly) stay vigilant to keep any wobbly wooks from knocking the kiddos down.

I thought the Phish crowd was welcoming and accepting before, but bringing Babs to a show has deepened my oceanic love for them. Everyone, even those without kiddos, love to see kids at shows. A new generation of Phish fans! Phamilies having fun together! Awesome! 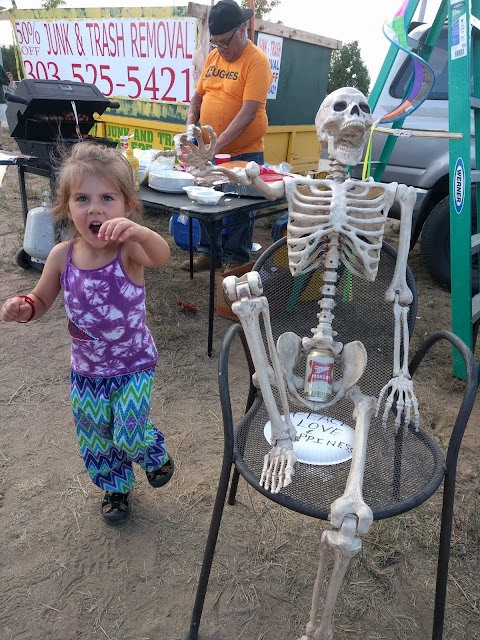 Vendors gave her pretty rocks, stickers, jewelry and high fives. It was magical. Babs watched the freak show in the lot before the actual show with wide-eyed wonder: girls with butterfly wings, humans of all genders wearing brightly colored dresses and headgear and even a man with a lizard on his shoulder.

She was so enamored I told her she could go talk to the people who struck her fancy, and for the rest of the evening she scampered up to girls, tapped them on the hip and shyly complimented them for their fabulosity. She was loved by all and watching her experience it may have been the most fun I've ever had at a Phish show, and that's saying something.

Since Babs had so much fun, we decided to shuffle some tickets around (Mr. Go faithfully uses CashorTrade.com) and take her again the second night with even greater success.

If we worried toting her around Shakedown would cramp our style, we needn't have. She improved the experience (as she usually does) and I am struck anew with love and gratitude in the knowledge that we are a cohesive family unit and she an active, vital member of it. 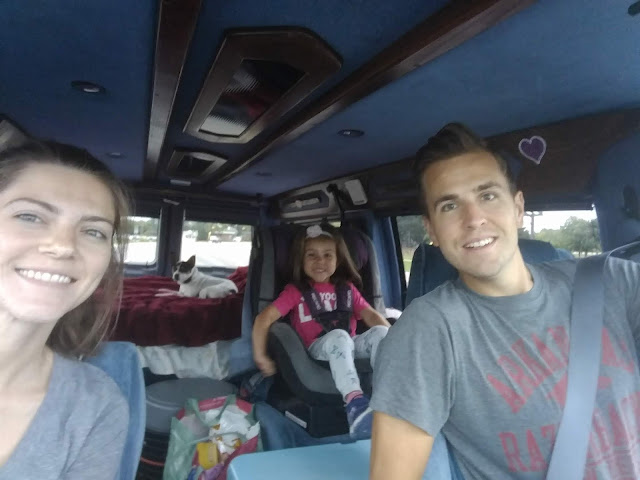 Summer rushed by at an unrelentingly rapid pace. Since my last post, we camped for 4 nights at Swan Lake, the lake of my childhood, where all my family reunions have been held for my entire life. It's a beautiful lake and excellent for swimming. (Babs, once afraid of the water, now wants to do nothing else than swim.)

I was particularly proud to have beaten Mr. Go's smallmouth bass record with not only a 19" bass, but a 20" bass the very next day. 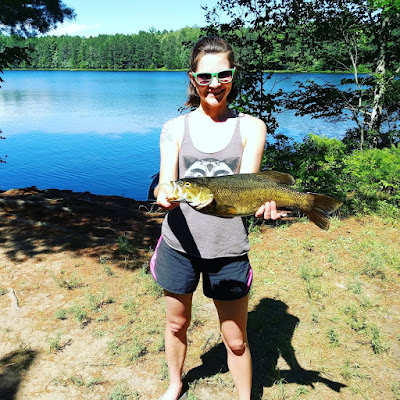 We followed that up with a 9-day trip to George, WA. Babs and Flotsam were left with Grandparents while Mr. Go and I took the Subaru across the country. 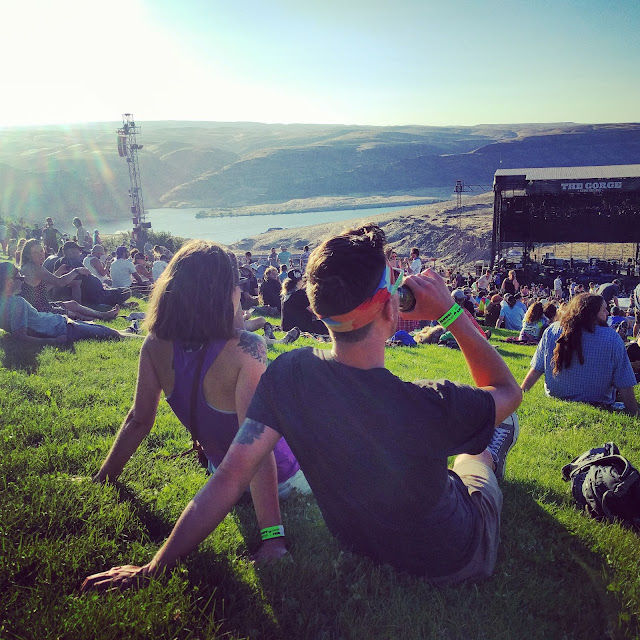 I've told you about this before in this post, and while the core crew was smaller this year, we enfolded two of our camping neighbors into our group to round out the craziness and now our network has grown.

On the way out, Mr. Go and I spent some quality time in the car listening to Into the Wild by John Krakauer and camped in State Parks and campgrounds along the way. Since the Subaru was so packed full, sleeping in it was not an option, and we had to pitch a tent every night, which quickly became tiresome. But I did get this sweet shot of Mr. Go being zen by a waterfall in Minnesota: 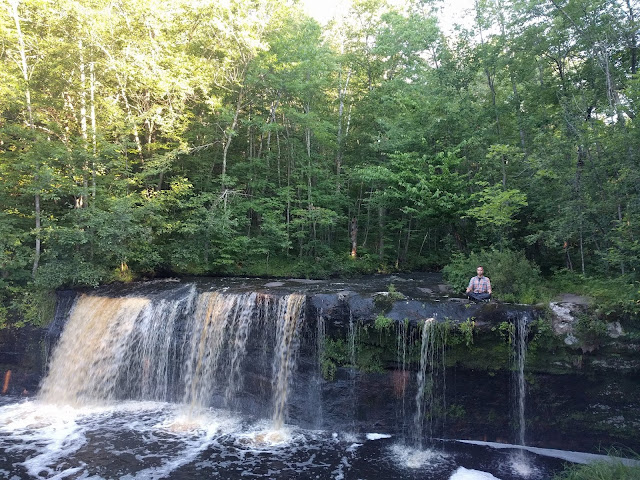 RV Parks and campgrounds are seldom as nice as they sound, and State Parks (many of which require a vehicle day pass to enter) are more expensive than they're worth. The app RV Parky helped in finding campgrounds along the way.

Three days after we got home, we were packing up the van for another week-long camping trip with one half of my family, during which we picked a prodigious amount of blueberries.

The next week we made an impromptu camping reservation at the most primitive site yet. Surprise, surprise: there wasn't even a toilet, a discovery which led to us digging cat-holes with Babs' plastic shovel. Good times were had by all.

The week after THAT, we dumped Babs and Flotsam again, for another trip in good ole Subey, this time bound for Watkins Glen, NY, for the famed Phish Festival weekend, a bi-yearly event, this time called Curveball. We met up with two sets of friends, and as soon as all our camping gear was set up, we got a nasty surprise.

The entire week before, the Finger Lakes area had received monsoon-level amounts of rain, which led to the rising of the water table, which led to concerns regarding water potability, which led to the CANCELLING of the festival, not 10 minutes after the last tent stake was pounded into the soggy ground.

After making it through all stages of grief, all 20,000 of us campers consoled each other by getting drunk and running around the campground until the wee hours.

A week (and a friends-with-kid visit) later, we packed up and left for Colorado, this time with the whole fam damily in tow.

The first leg of the adventure was to take Babs to her first (and second) Phish show! More on this in a later post...

We travelled from Thornton, CO down to Colorado Springs so Mr. Go and GuideBook (remember him from our adventures in Mexico?) could reclaim some branches from trees around his house and make an arbor for he and Ms. GuideBook to get married under.

After this we spent a night with friends in Golden, then headed on up to the mountains to stake out the claim at Boreas Pass, where the Guidebooks would be wed three nights hence.

Sleeping at 11,300 feet elevation is no joke. After one night, I was done and Babs seconded that emotion. Luckily, our other friends (also of the Mexico & Spain adventures) had a house in the town of Breckenridge, where we were gratified to shower, nap and wash our clothes.

Wedding festivities abounded, culminating in a morning ceremony atop a mountain with a breathtaking skyline background.


After the fake paella lunch that followed, the Go family split. Babs' school had been in session for a week without her and Breckenridge, though closer to sea level than Boreas Pass, still sits at a pretty 9,600 feet elevation, and none of us were acclimated.


We made tracks on the way home, stopping off at rest areas for two nights of sleep. Note: The rest area at Adair, Iowa is stellar. Did you know Iowa's rest areas offer WiFi? And they allow overnight parking.

Also, in the town proper of Adair, Iowa, there is a great little park not far off the highway where we stopped off to let Babs let out some energy.

I typically consult this list to determine whether overnight parking will be allowed. Wisconsin says it's a No, but we've parked overnight at the rest area in Dubuque twice now with no issues. If there aren't signs posted that specifically say "No overnight parking," I'd do it. 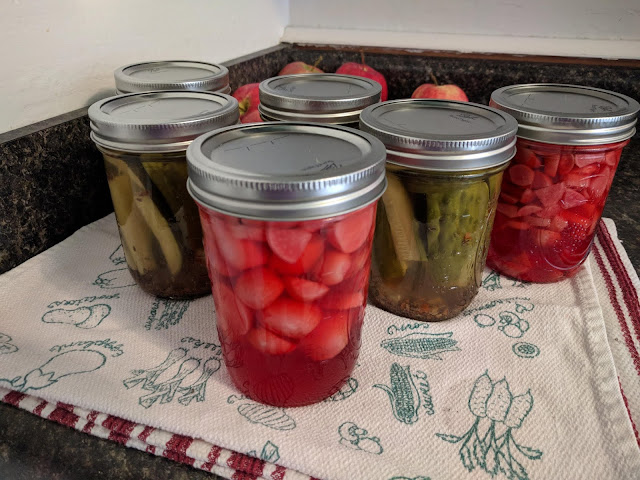 Between pickling and canning our home-grown veg (more on that in a later post), house projects (including but not limited to replacing one nasty window and the asbestos tile in the attic), and keeping up with personal hygiene, Fall promises to click by at an unrelenting pace as well.

And you know what? I wouldn't have it any other way.