Camping in a Van 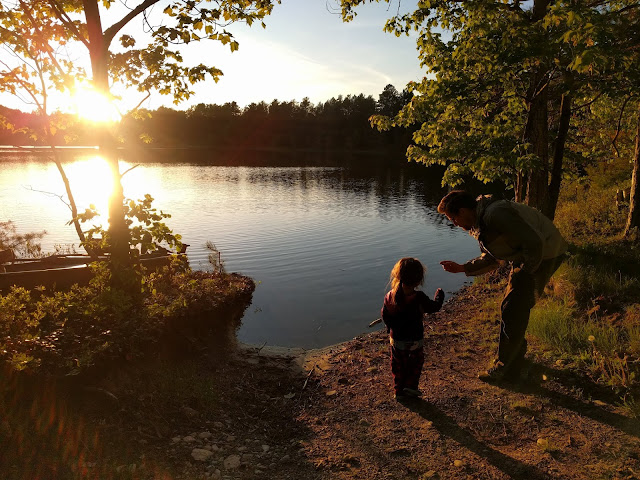 We just concluded our second camping trip of the summer, at a tiny lake in the Upper Peninsula of Michigan. In case you were wondering, the van makes an excellent camper.

On our first trip, we slept in our 3-man tent, but this time we slept in the van, which, with the foam topper on the bed, is infinitely more comfortable than being shoved off the Thermarest by a wiggly child and a blanket-hog of a terrier in the tent.

As I may have mentioned, totes are the savior of van-living. Keeping grocery items in bags on the floor is the pits. Items I reached for a lot (salt, oil, sunscreen, bugspray) I now keep in two little totes for easy access. The duffel bag stayed crammed under the bed as usual, keeping our living space open for changing clothes and other activities.

We camped at Mowe lake for three nights in late May and caught a break in the warm weather so we spent most of the time in sweaters. But it was great, the wind kept the bugs away and we spent a lot of time out fishing.

Speaking of which, Mr. Go bought a 14' john boat with an 8hp motor and a trolling motor and, after stocking up on all the accoutrements, spent literally more time in that boat than he did at the campsite. He brought me back an 18" largemouth bass and a mes of bluegill though. 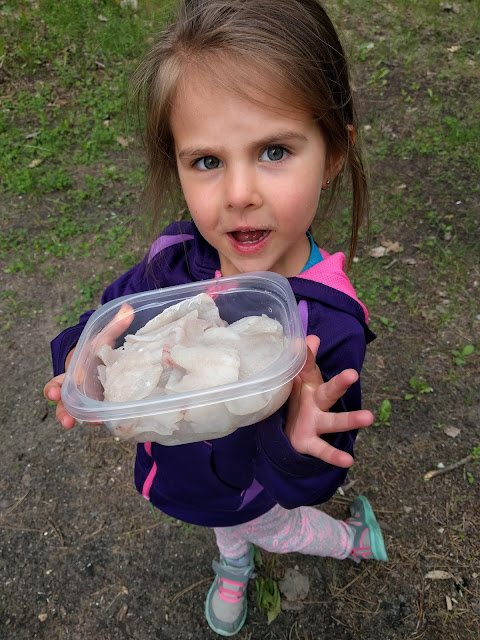 Last week we camped at Steuben Lake for three nights and had gorgeous weather. Halfway through, the heavenly breeze quit, and the black flies tore us up. Poor Babs got the worst of it. She's covered in red itchy, swollen bumps.

Actually, I take that back. Finley got the worst of it. Let me tell you about Finley. Many years ago, Finley was bit in the hindquarters by a horsefly and ever since he has been paranoid about bugs. He spent the entire trip whipping around to check that there wasn't anything getting after his butt. He was in a chair (yes, we brought a chair just for Finley), under the van, trying desperately to get in my lap until finally I just let him in the van where he spent the last two days getting our pillows filthy, but at least his butt was safe.

Mr. Go, as with any skill he sets his mind to, has become quite the angler. He hauled up 5 pounds of fish fillets from Steuben. Pike, walleye, sunfish and Babs snagged a 15" bass. She's come a long way from not wanting to get near a worm. She's touched worms and petted fish and absolutely loves fishing. 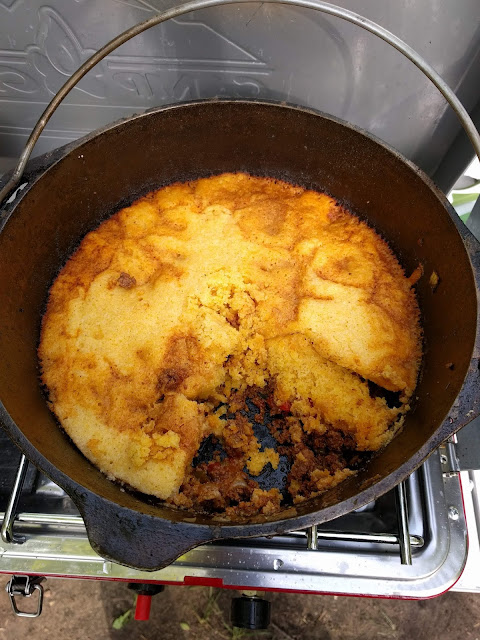 My camp cooking has been stellar, no surprise there. I used the round cast iron dutch oven for everything, I don't even know why I bothered to bring any other pans. It has a lid, which is key for softening veggies and fluffing rice. (Fresh off the Grid has some amazing campfire recipes--cornbread chili and campfire paella are now staples.) I love cooking over the fire; I'd love to do more of it and rely less on the propane campstove. Sizzling bacon with a little bit of ash and smoke, like the cowboys used to do, is satisfying in a deep, primal sort of way. 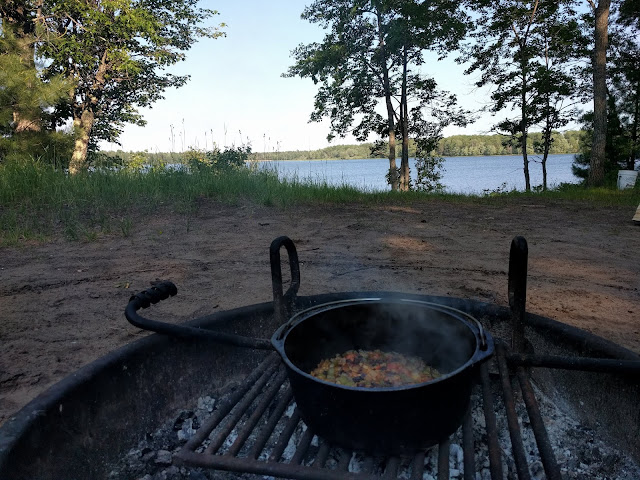 We purchased an RTIC 45qt cooler for camping purposes, hoping it will also solve our road trip food-cooling issues (See Last Post). It's pretty big, so it has its pros and cons for road tripping but for camping it's been stellar. It holds an ice block like a monster and is sturdy enough to double as a seat/table.

We go out camping again this week, then it's a 10-day trip for Mr. Go and I to Washington state. It's already mid July...where has this year gone??